Panther on the Eastern Front 1944 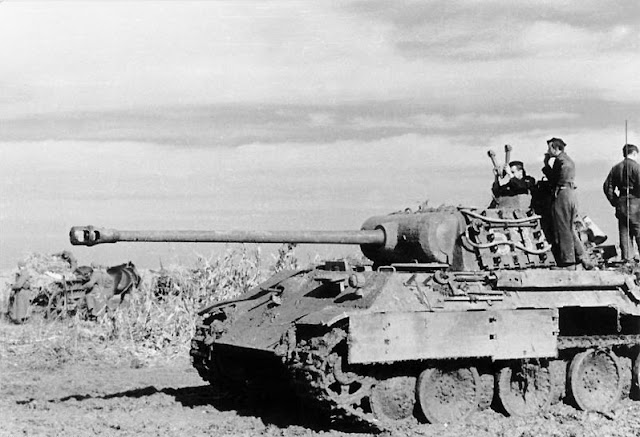 One source has cited the cost of a Panther tank as 117,100 Reichmarks (RM). This compared with 82,500 RM for the StuG III, 96,163 RM for the Panzer III, 103,462 RM for the Panzer IV, and 250,800 RM for the Tiger I. These figures did not include the cost of the armament and radio. Using slave labour on the production lines greatly reduced costs, but also greatly increased the risk of sabotage. French army studies in 1947 found that many Panthers had been sabotaged during production.

The main gun was a Rheinmetall-Borsig 7.5 cm KwK 42 (L/70) with semi-automatic shell ejection and a supply of 79 rounds (82 on Ausf. G). The main gun used three different types of ammunition: APCBC-HE (Pzgr. 39/42), HE (Sprgr. 42) and APCR (Pzgr. 40/42), the last of which was usually in short supply. While it was of a calibre common on Allied tanks, the Panther’s gun was one of the most powerful of World War II, due to the large propellant charge and the long barrel, which gave it a very high muzzle velocity and excellent armour-piercing qualities — among Allied tank guns of similar calibre, only the British Sherman Firefly conversion’s Ordnance QF 17-pounder gun, of 3 inch (76.2mm) calibre, and a 55 calibre long (L/55) barrel, had more potential hitting power.