M3A1 half-track with 500 pound speaker, capable of projecting sounds as far as 15 miles. Used by the US 23rd Headquarters Special Troops, aka the Ghost Army, for sonic deception, 1944 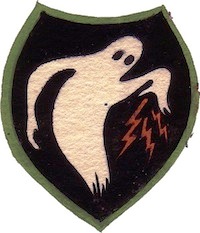 Read more about the Ghost Army Scheunentor translates to barn door, this was not due to the size of the gun shield but instead a reference to the guns manoeuvrability!

The heaviest tank on the battlefield, the Tiger II or Königstiger was a formidable foe, but it had its fair share of shortcomings.  From over-complicated engineering, not enough power for the weight of the beast and the lack of quality raw materials led to this monster not being able to perform to its fullest.
However that being said, wherever this tank was deployed, it devastated its opponents.

In this photo two King Tigers of the 503rd Heavy Panzer Battalion are passing through a Paris street on the way to the Normandy front in August 1944, ultimately however nothing the German’s threw at the invading Allies was enough to halt their advance, and once Operation Bagration was launched it was really only a matter of time before the war for Germany was over.

An interesting photo as the Vomag Omnibus 7 was a civilian transport vehicle.  There isn’t a lot of information available about the Omnibus 7.

The variant is known as the Vomag 88mm Flak 18 Waffentrager.  It is an example of the need to get such an excellent but horribly immobile weapon into battle and as maneuverable as possible. A German panzer crewman stands over the grave of two fallen panzer crewmen – potentially from the Panzer I in the background.

Most likely this photo is taken in 1941 during Operation Barbarossa, as the black panzer beret – the schutzmütze – was phased out and production had ceased in 1941, however it continued to be worn after that date for a while.  The surviving crewman is wearing the newer style of panzer crew headgear which was introduced in early 1940. The Flak 41 was a Rheinmetall improvement on the famous Krupp “eighty-eight”, resulting in a more powerful version than any of the previous ones.  Only very few numbers were produced, but this prompted Krupp to respond with another prototype which ended up becoming the feared Pak 43 & KWK 43 – mounted on the Elefant, Jagdpanther and the Tiger II.

Two Panzer 38(t) tanks passing a knocked out Soviet T-34/76 in 1942, on the front of the first tank a wounded German soldier is hitching a ride. Here’s a gif for you today, a camera mounted on the turret of a Tiger I traverses across an open field with another four Tiger I’s in the foreground.

One has to remember that all of these images and videos that provide us with a glimpse into the past; in this case the second world war, were captured by men and a few women on the front lines of combat.  Many of whom paid for their footage with their lives.